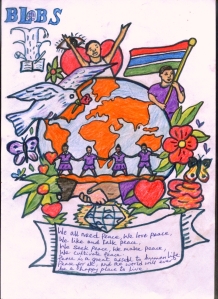 International Peace Quilt has been recognised by London 2012 for the work it is doing to promote peace through sport and culture with an additional recognition. This project has already been awarded the Inspire Mark, the badge of the London 2012 Inspire Program, for the work it has been doing to engage students and their teachers in promoting peace between all countries and cultures through art and the formation of One Peace Quilt.

International Peace Quilt has now also become part of London 2012’s TRUCE, which recognises projects that help to promote the Olympic Truce by building a better and more peaceful world through sport and the Olympic Ideal.

The Olympic Truce originated during the ancient Olympic Games when fighting ceased for seven days before and seven days after the Games, allowing athletes, artists and spectators to travel to Olympia, participate in the Olympic Games and return to their homelands in peace.

In the 21st century, the core principle of the Olympic Truce is to build a more peaceful and better world through sport and the Olympic ideal and to use sport to promote and encourage peace, mutual respect, reconciliation, and conflict resolution between and within communities.

Seb Coe, Chair, London Organising Committee of the Olympic Games and Paralympic Games said “The main principle behind the Olympic Truce today is to help to build a better and more Peaceful world through sport and the Olympic ideal. We are delighted that The International Peace Quilt is not only helping us to bring the Youth of  the World together in the cause of Peace, but is also using Sport, Culture and Art to promote World Peace.”

A very special THANK YOU to EVERYONE involved so far in this project, to all the World`s schools, their amazing creative students, their wonderful teachers who have given of their valuable time, to Lucy Tasker`s amazing contribution, and The Abrahammoss School Manchester, to other partners in the Project, The Guisborough Rotary Club, Guisborough Quilters and to the Redcar & Cleveland Neighbourhood Management Team. Also to Peace One Day for making available their Global Education Resource free to all schools and to Helen Burns in Peace Direct for guidance early on in the project. To everyone who has helped with a contact, this project would not have been possible without you all.

“I feel a very unusual sensation, if it is not indigestion, it must be gratitude.” Benjamin Disraeli.

“Children are one third of our population and ALL of our Future.”

Thank you for them all.

This site uses Akismet to reduce spam. Learn how your comment data is processed.

Hello Peace-lovers – This project supports the aim of World Peace as desired by the children.

We are now accepting designs for the Omotenashi Schools Project 2020.

Thank you to all schools who submitted designs for the 2012 and 2016 Schools' International Peace Quilt Projects and to those who took part in our new Olympic themed project called 'STRIDE for TRUCE'.

In 2012 the Schools' International Peace Quilt involved 203 Countries in one wish for Peace as a celebration of the London Games. Thank you again to everyone that participated.

The Schools' International Peace Quilt' of 2012 and 2016, Peace Patch UK and our new project 'Stride for Truce' help us further promote the OLYMPIC TRUCE which dates back to the original games in the 9th Century BC.

The idea was revived in 1993, when the United Nations passed Resolution 48/11. The central purpose of the Ancient Games was to provide for a pause in the endless cycle of violence through the observance of the Sacred Truce. Our ancient and supposedly less civilised ancestors made it work.

"The Children's Book of Peace" is another lasting legacy of the children's designs from London 2012.

"Joy is a sustained sense of well-being and internal peace - a connection to what matters." Oprah