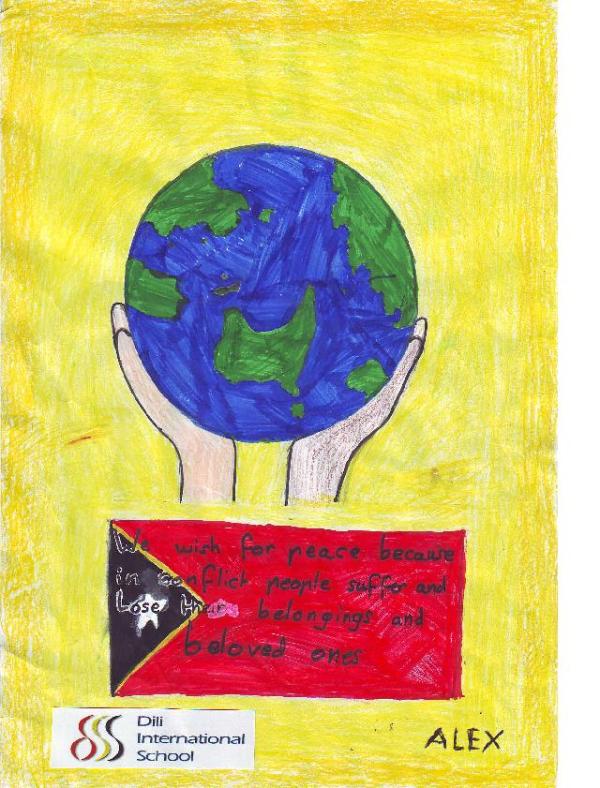 This is the drawing received from Dili International School, East Timor/Timor Leste.A Special  thank  you to Alex Sword Gusmao from grade 5/6 and aged 10. Candice Tappin, their Teacher held an art exhibition last week , and this is the winning entry.

Alex says, “We wish for Peace because in conflict people suffer and lose their belongings and beloved ones.”

“I would just like to take this opportunity for thanking you for organising such a fabulous project, my kids thoroughly enjoyed taking part in it and it meant a lot to them, especially with all of us living in a country such as Timor.”

This is the wonderful drawing received from The International School in The Seychelles. Thank you to Martina from year 6 , aged 11 for this piece of art  and also to Her Head Teacher Mrs Jane Lincoln for coordinating the project in this school.

Martina says, “We all wish for Peace because it brings love the Power of Life. “ 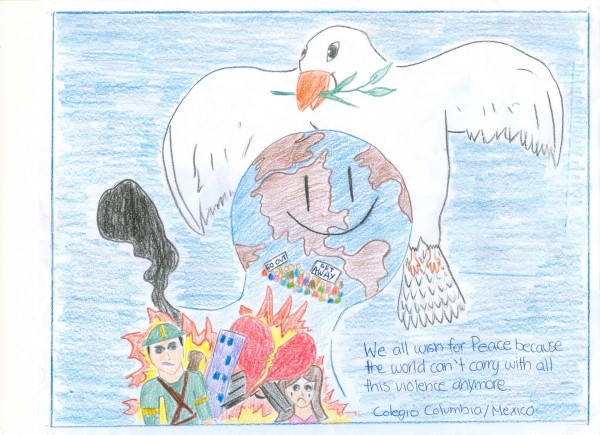 This is the winning design chosen from the competition held in  Colegio Columbia, Mexico  to represent students on the art quilt.The competition included kids  from 4th to 9th grade. Thank you to  Enrique Antonio Vazquez Morales,the student who drew this poignant design.  Enrique Antonio  is 13 years old and  is in 8th grade.

We all wish for Peace because the World can’t carry with all this violence anymore.

” Thanks for the link and for the invitation to the contest. It is definitely an idea that resonated with everyone here at school, peace is such a lacking element in our community right now that it was a relief for kids to express why it’s important.” Sandra Chavez

A Big Thank you to Sandra Chavez, Laura Guajardo and all students  involved.

In Mexico the flag is often called the Bandera Nacional. 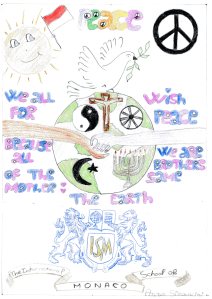 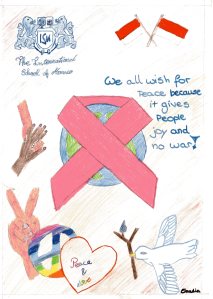 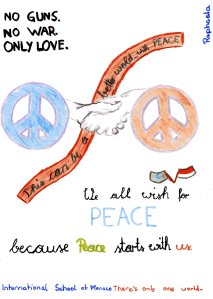 Here we have a selection of drawings from The International School of Monaco. Thanks to Anna, Beatrix,Claudia, and Raphaela for these wonderful pieces, and to Jennifer Rhodes,art teacher for coordinating this project in your school.

We all wish for Peace because we are all brothers of the same Mother: The  Earth

We all wish for Peace because Peace starts with us

The flag of Monaco consists of two equal sized horizontal stripes -Red and white were the heraldic colors of the ruling Grimaldi family. The colors appear as a diamond shaped pattern on the shield of the family’s coat of arms.

The flag of Monaco is identical to the flag of Indonesia other than its size. The flag of Poland is also similar but with the color scheme reversed. 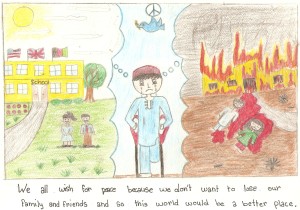 This is the drawing received from International School of Kabul, Afghanistan. Thank you so much to Katayoon Hamid grade 6 for this great piece. Thanks also to Joel Mangin for coordinating the project in this school,and to all the students and staff that were involved in the successful outcome.

Katayoon`s message is  We all wish for Peace because we don`t want to lose our family and friends and so this World would be a better place.

“We had a competition in the fall to complete a drawing about Peace in Afghanistan and it was a big success.The students were very excited and almost all of the staff voted on the winner, including our school director and principal.”

This  flag was adopted January 4, 2004. This flag consists of three stripes of the colors black, red, and green. The center emblem is the classical emblem of Afghanistan with a mosque with its mihrab  facing Mecca.

Afghanistan has had more changes of its national flag during the 20th century than any other country in the world.It has had a massive 20 different flags since the first flag in 1747. In only 4 years (1926–1930), Afghanistan had 7 flag changes – many of these flags were used as the nation’s flags for only a few months.

Thank you to AISN, Niger for this unusual piece to join in the International Peace Quilt. This drawing was designed by 10 students using artist Keith Haring as inspiration.  The whole school (50 students and 12 staff members) voted on the wording. Special thanks to Judith Keller and all students involved.

We all wish for Peace because it unites people with Love.

“Thank-you so much for including us in this project.  We look forward to following the creation and presentation of the quilt.”

Niger Flag Meaning:
The orange symbolizes the Sahara Desert, which covers more than half of the country of Niger. White stands for purity and innocence and the green stands for the River Niger, and the lush vegetation and fertile agricultural areas of the country. The orange circle represents the sun and also the readiness of Niger to defend its freedom.

A big thank you to Peter Tiscali from The Guisborough and Great Ayton Rotary Club for helping us to reach Lithuania.

These 3 drawings have been done by Migle, Saule and Aiste from The Čiurlionis School of Art in Vilnius, Lithuania. In Migle`s drawing above, Migle explains how two officers of different armies went into Peace.

In the second design Saule has drawn a secret door in the corner which opens into the World of Peace.  And Aiste described that in her drawing She has drawn two best friends, as all the Children in the World want to be friends.

Special thanks to all involved and also to Giedre Ilciukiene for coordinating this project for your school and Lithuania.

Lithuanian Flag Meaning:
Lithuanian’s flag colours are based on the country’s traditional national dress – the yellow stripe represents the sun, Lithuania’s fields of wheat and prosperity; the green symbolizes the country’s forests, flora and hope; and the red stands for the blood spilt for independence, courage and the people’s love for Lithuania.